Leaving Salisbury for the last time 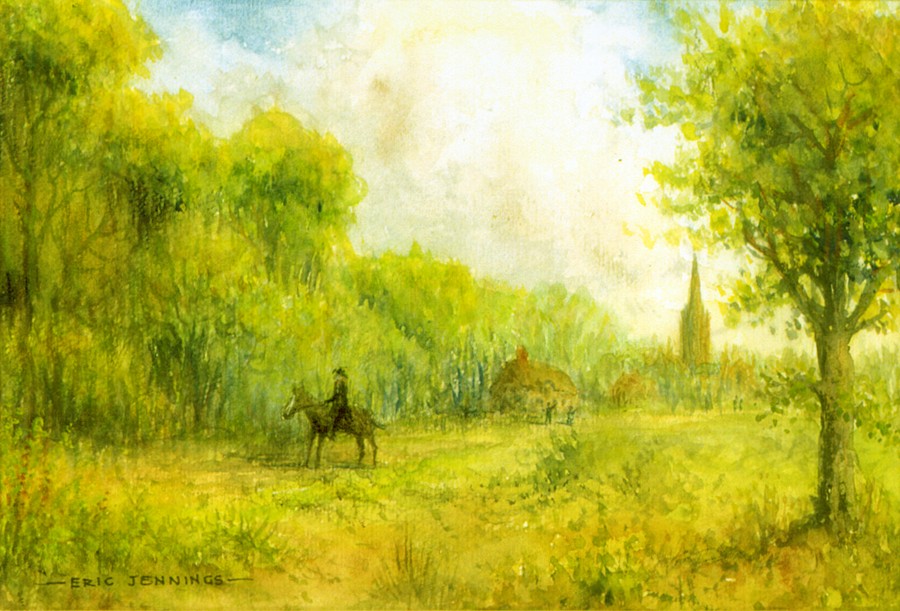 Asbury rode from Salisbury to the Bristol Methodist Conference, where he responded to Wesley’s call to go to America and preach. He noted in his Journal: “I am going to live to God, and to bring others to do so . . . If God does not acknowledge me in America, I will soon return to England.” He never returned.

Landing at Philadelphia on October 27 1771, he was warmly welcomed by the Methodist society there. 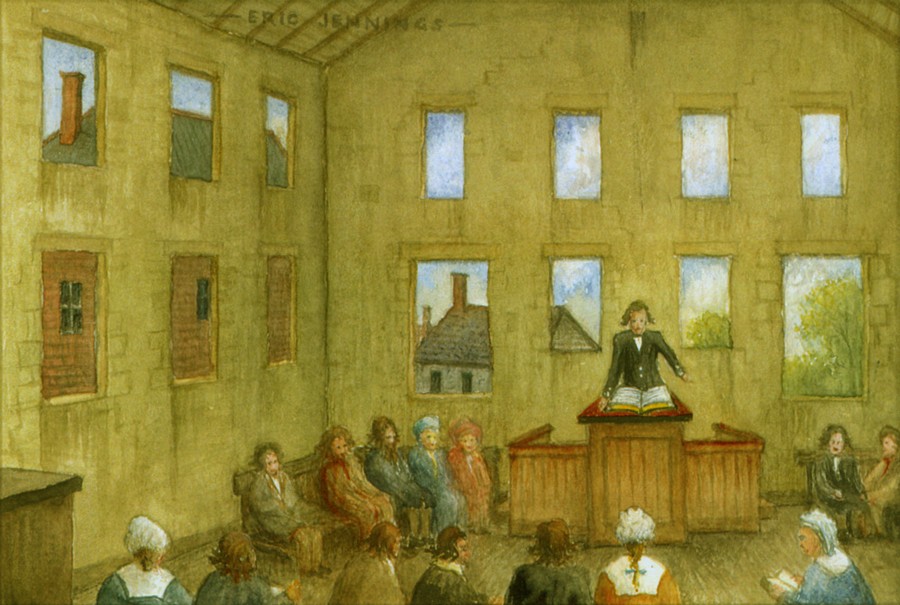 The day after arriving, Asbury preached in St. George’s Church, Philadelphia. The Methodists had bought the unfinished church (just four walls and a room) in 1769 at a cost of $1000. Chapels or “preaching houses” at that time were often no more than log cabins, without window glass.

A chase under fire 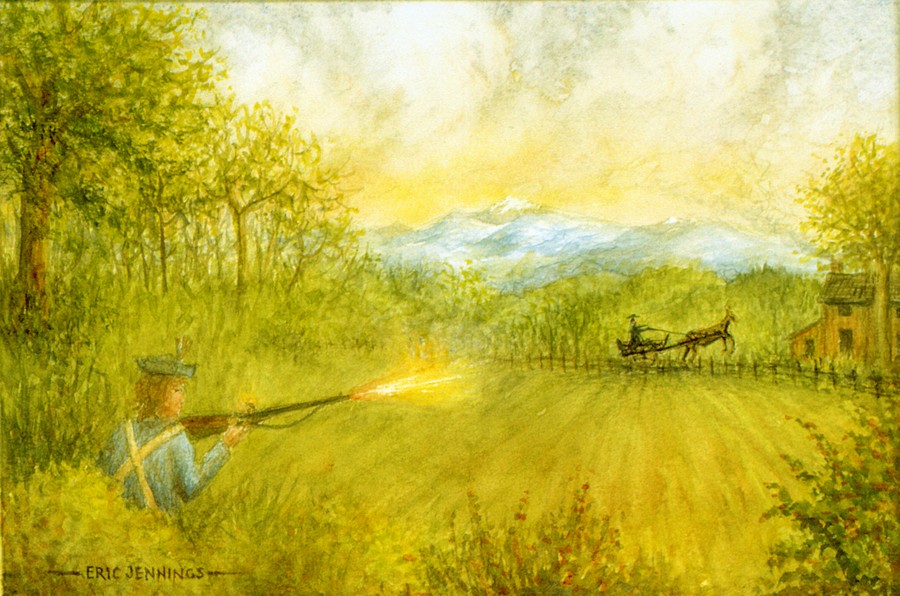 Luckily this bullet, fired near Annapolis, missed Asbury. In the Revolutionary war an Englishman was often regarded as a spy. Asbury and the other English preachers were therefore in constant danger of arrest by armed men. Many of the other preachers returned to Britain, but Asbury never gave up his mission.

Hiding in a swamp until sunset 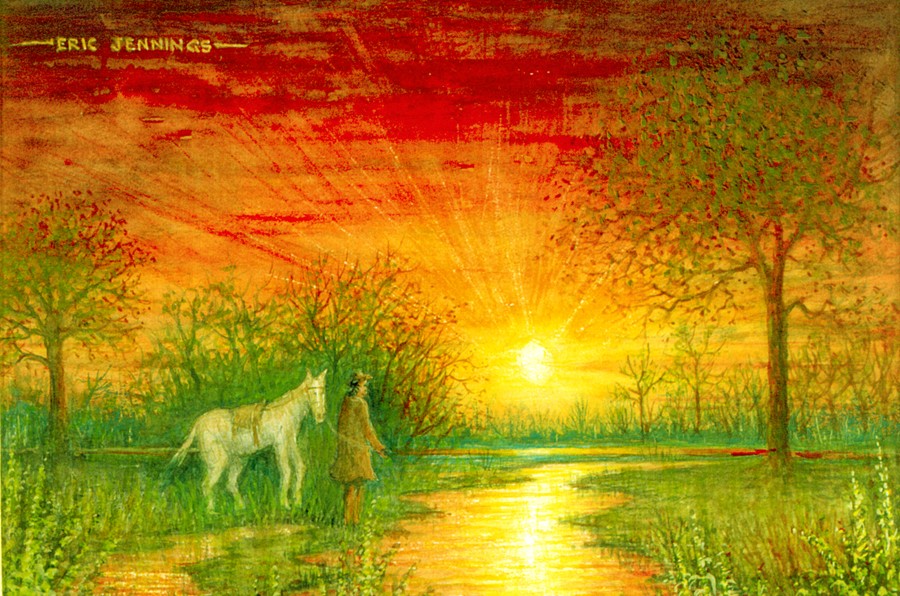 Not only was Asbury in constant danger but he soon realised his presence also threatened the safety of his friends, such as Judge White who gave him lodging. On April 2, 1778, Judge White was arrested and imprisoned. Asbury left; and so as not to betray his friends, hid in swamps, or houses safe from intrusion. During this period of lonely travel he never stopped preaching. 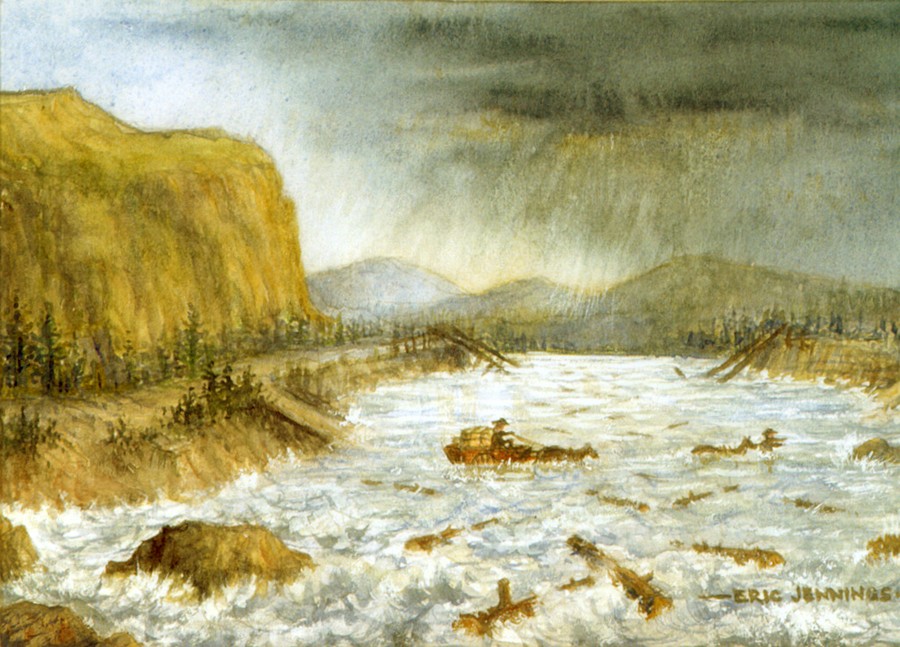 Asbury described crossing flooded creeks, how “the water kept the carriage up”, helping it to float like a boat. Across deep creeks the horses were forced to swim “among rocks, holes, and logs”.

Exploring a cave and singing a hymn 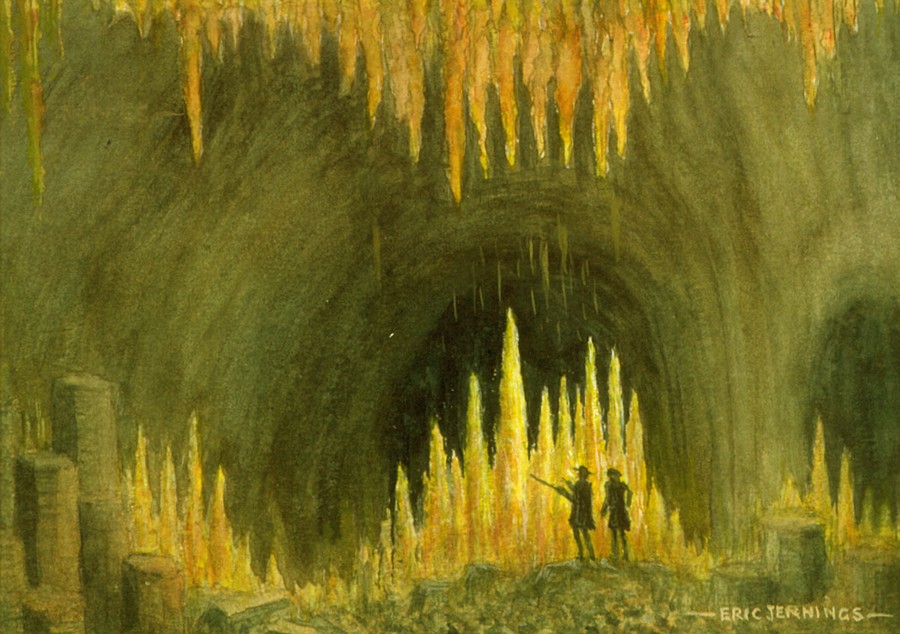 In a cave with “lofty chambers, basaltic pillars, and stalactites resembling the pipes of an organ”, Asbury sang a hymn and reflected “the sound was wonderful”. He writes, “I came away filled with wonder, humble praise, and adoration.”

Asbury and a companion sleep on mountain rocks 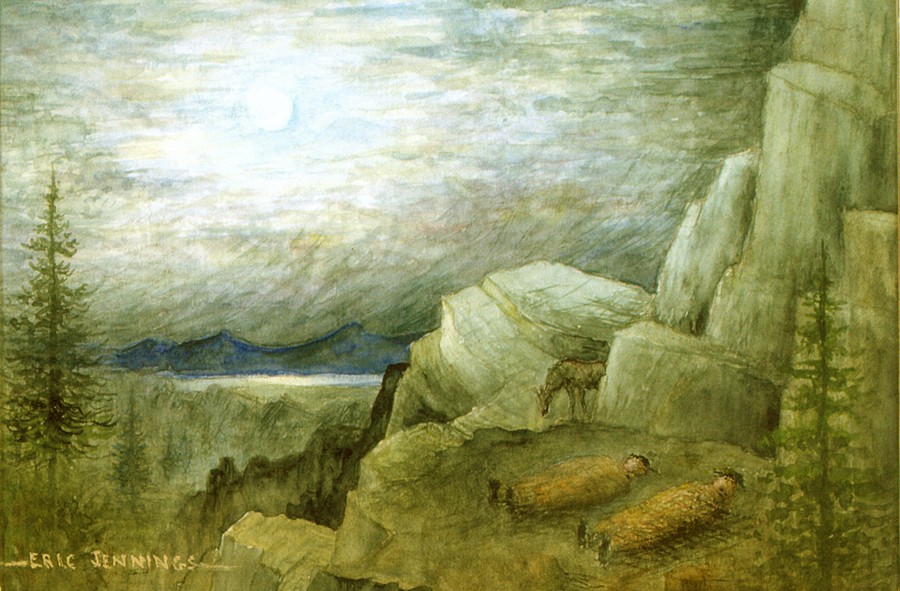 The experience in the cave makes Asbury sound like a tourist; the truth is that he was a pilgrim. And as such, his journey was often uncomfortable. In West Virginia, many log cabin houses had only one room, which preachers shared with the family. One was 20 feet by 16 feet containing 7 beds, 16 people, some noisy children – and Asbury!

“Sometimes”, he wrote, “necessity compels us to seek retirement in the woods.”

The congregation become a fire brigade 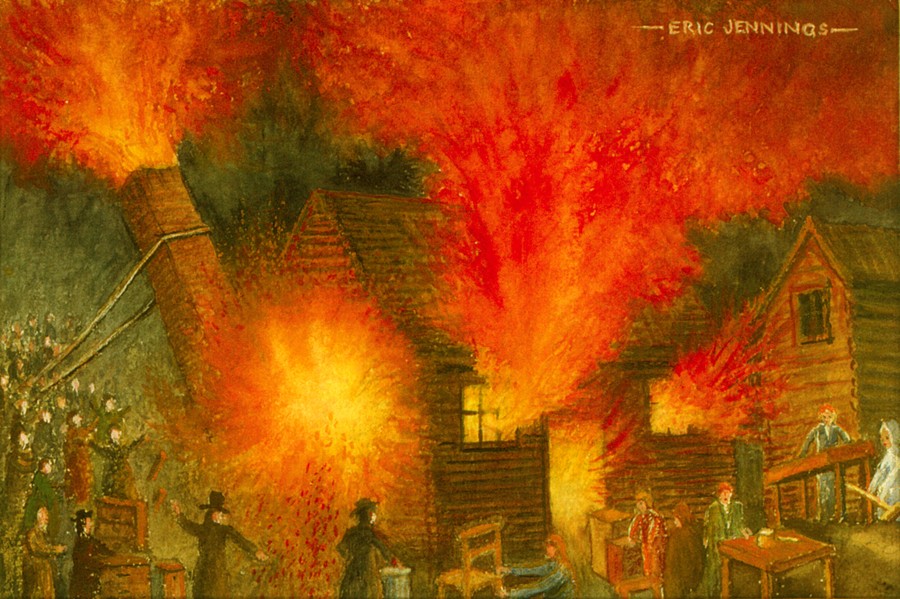 Fire was a constant hazard in lumber country. While Asbury was conducting a service in 1782, the house next to the chapel caught fire. The service at once became a rescue operation through which the inhabitants and the furniture were saved.

Asbury preaches in playhouse in Bath 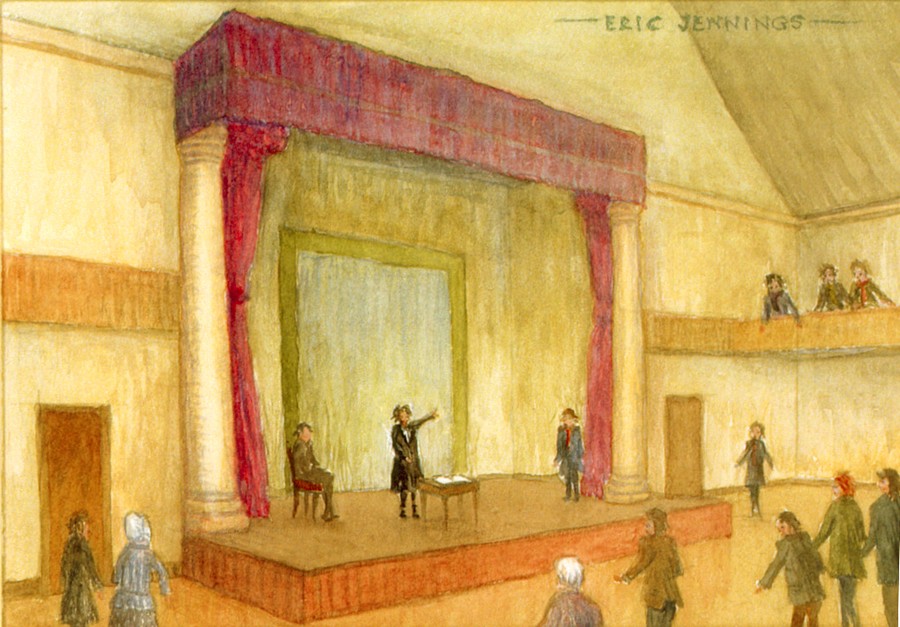 Bath in West Virginia in 1785 was like its English namesake in two respects. It was noted for its mineral springs, and its pleasure-seeking society.

Asbury spent a month here, using the stage as a preaching platform, and sleeping with the actors at night. Whatever situation he encountered, he turned it into a Gospel opportunity. Just over two years later, a church was built “at this place of wickedness”. 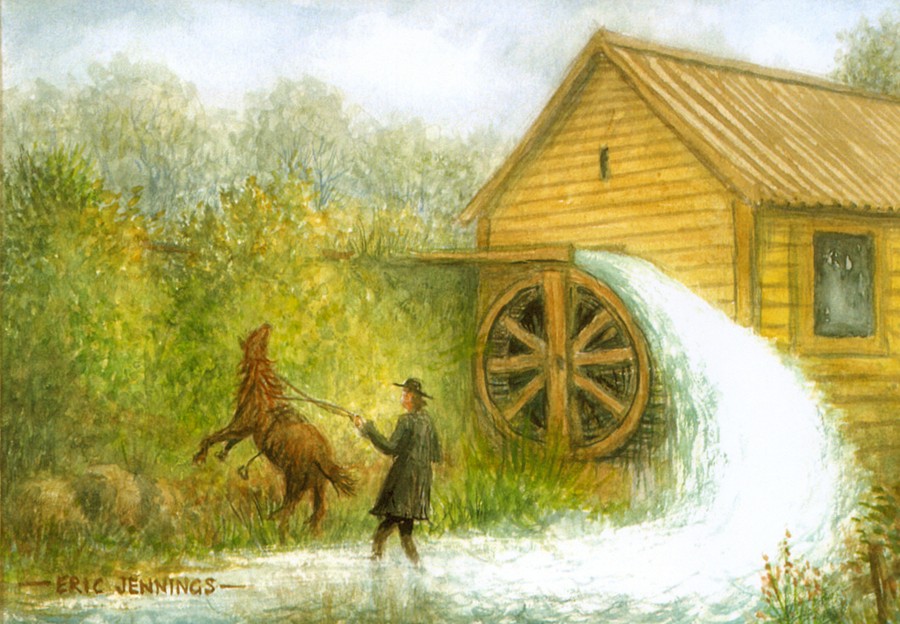 Something, on this occasion, caused the horse to rear up. Asbury often got a good soaking, through accidents, fording rivers, and braving thunderstorms. He would ride on until he found a home where he could dry his clothes and sometimes his precious books too. Then he would use the opportunity to pray with the family.

Asbury’s ferry is nearly run down 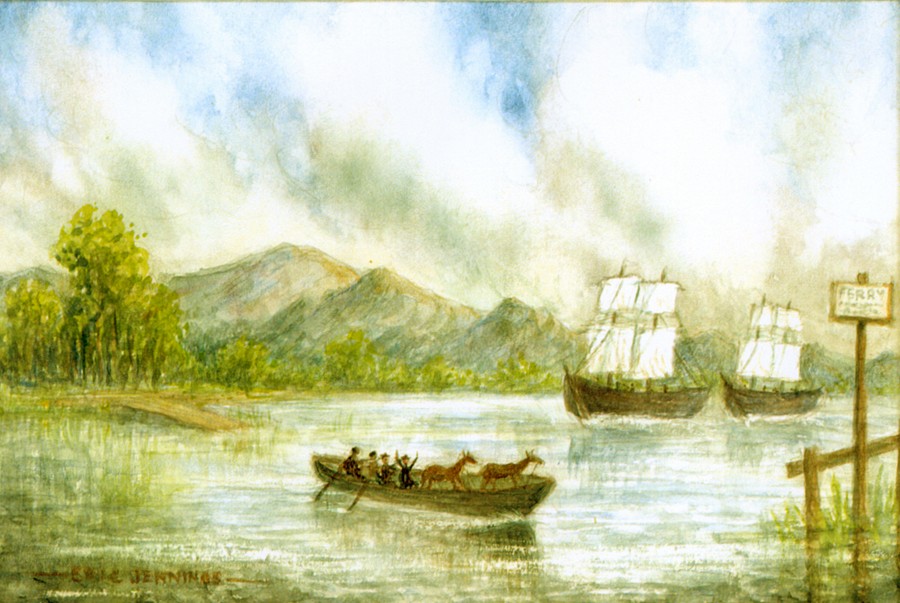 On James River at Swan Point Ferry only two men (where four were needed) worked the large boat in rough weather. Only narrowly missing two fast brigs in full sail, Asbury recorded how the two young men were so scared that “they sometimes prayed and sometimes swore!” 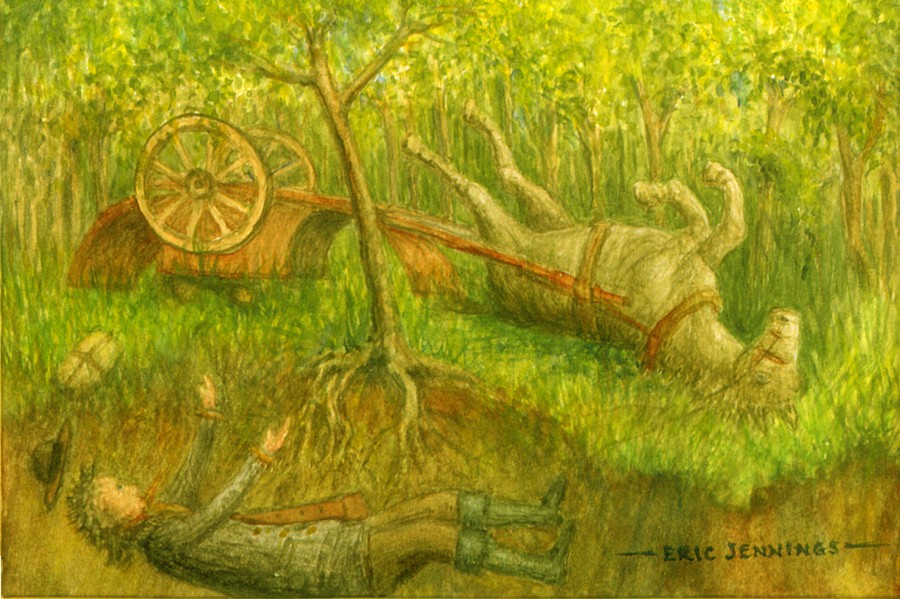 This is one of many accidents recorded by Asbury. Once the horse and carriage went over the edge of a precipice, but were saved by a sapling, bent but not broken.

Asbury’s concern for his horses was often greater than the attention he gave to his own comfort. “My poor horse, so weak from want of food, fell down with me twice; this hurt my feelings exceedingly – more than any circumstance I met with in all my journey”, he wrote. 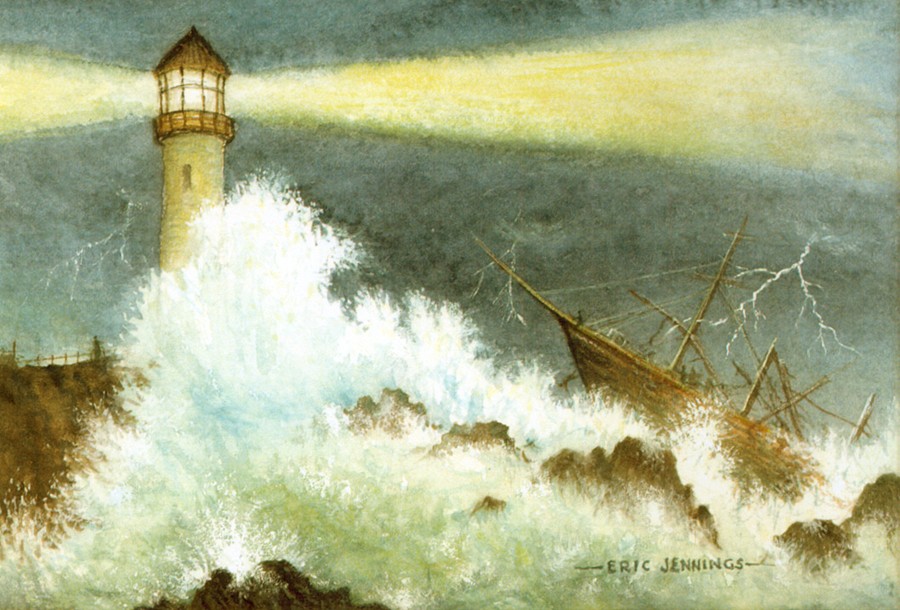 The lighthouse keeper at the historic Henlopen Lighthouse was a Methodist. Asbury visited the lighthouse, and heard how the villagers, and even the crew, looted a ship as soon as it ran on the rocks in a storm. The captain was drunk, and of 300 on board, only 40 were saved.

Stricter laws were made to prevent this from happening again, “and people on this shore are greatly reformed, for which they may thank the Methodists”, wrote Asbury.

Nearly a hundred slaves peeping in 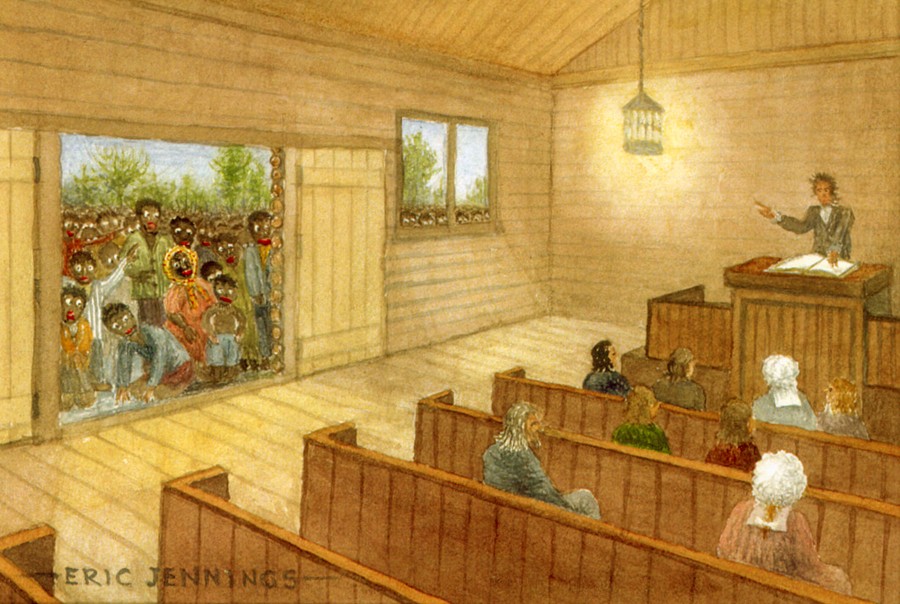 “It was not at all agreeable to me to see nearly a hundred slaves standing outside, and peeping in at the door, whilst the house was half empty: they were not worthy to come in because they were black! Farewell, farewell to that house for ever!” Asbury never preached in that church again.

The antislavery campaign was strongly supported by Asbury and his preachers, one of whom was nearly drowned by slave owners who held him under the village pump.

A night in the wilderness 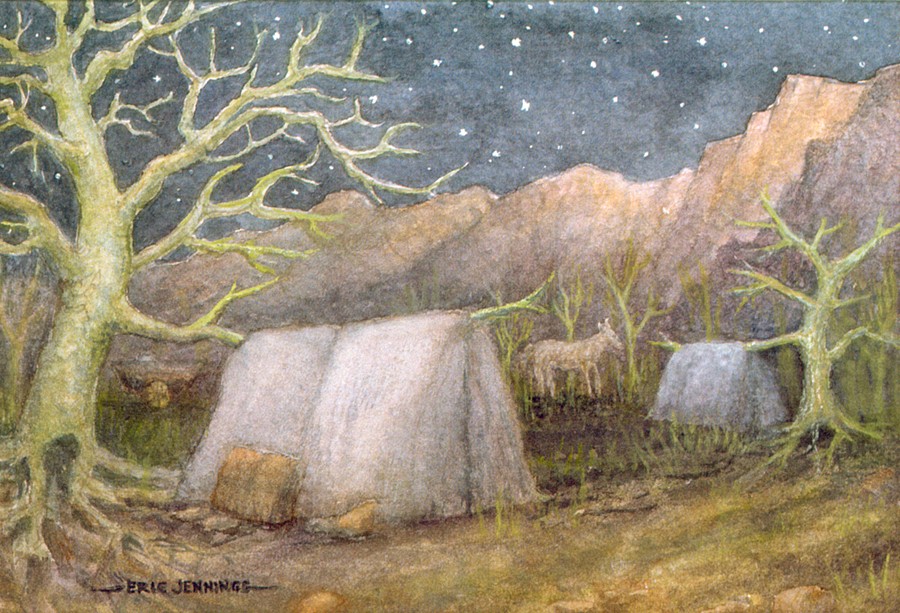 With tents made of blankets and cloaks hung over limbs of trees, Asbury only slept for two hours. He was consequently ill for about a month. “M’Kendree had to lift me up and down from my horse like a helpless child.” He was forced to stop for three days. Too weak to stand, he preached kneeling on a chair.

A camp meeting: trumpets at sunrise 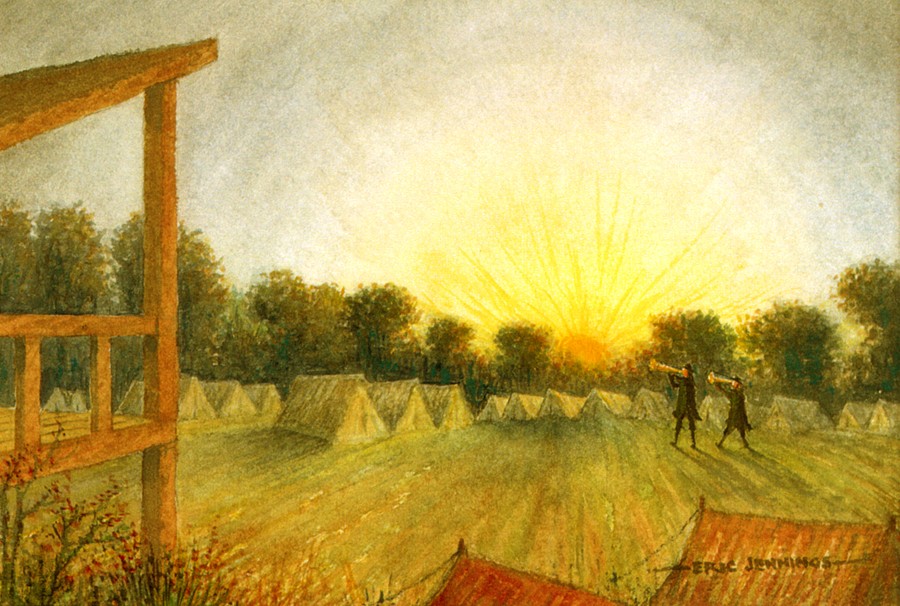 In 1805, Asbury received a report about the success of evangelical camp meetings. “At sunrise the trumpets gave the signal for morning prayer”, and for preaching at 8am, 3pm, and 8pm.

The camp contained 189 tents and covered wagons, and a preaching stand with a sounding board roof. The congregation arrived in 1,000 carriages and totalled about 10,000. Some 200 conversions were recorded by nightfall when, with 37 preachers on the stand, the trumpets signalled farewell. 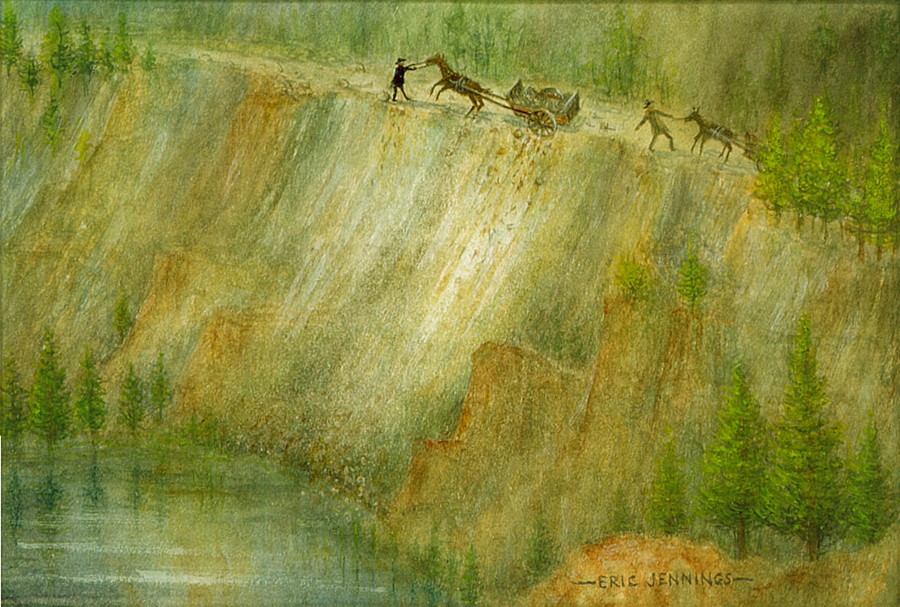 Asbury wrote: “Arrived at the Narrows, we found the bank had given way and slidden down; I proposed to work the carriage along by hand whilst Daniel Hitt led the horses. He preferred my leading, so on we went . . . but I was weak . . . and the mare ran me upon a rock; up went the wheel hanging balanced over a precipice of 50 feet . . . rocks, trees, and river . . . I felt lame by the mare’s treading on my foot . . . we unhitched the beast and righted the carriage after unloading the baggage . . . Never in my life have I been in such apparent danger.”

Woodland service and a thunderstorm 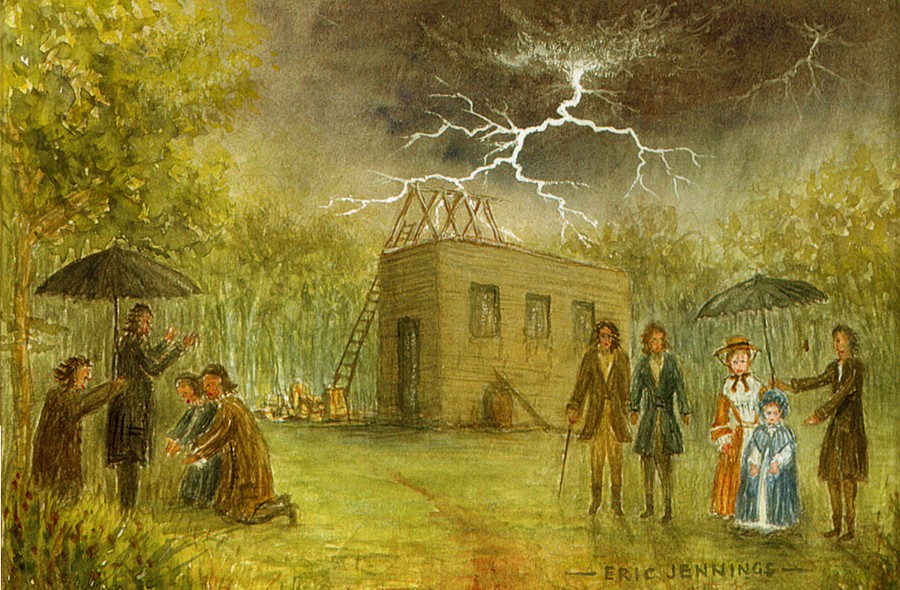 Asbury carried out an open air service to ordain two deacons, but as it proceeded there was a thunderstorm. William Butler knelt beside Asbury and held an umbrella over him. Asbury calmly continued until the deacons were ordained.

What Asbury did not know was that his bearing during the thunder and lightning so impressed little Deborah Sutton, standing and watching beside her mother, that it led to her conversion and life-long faith. 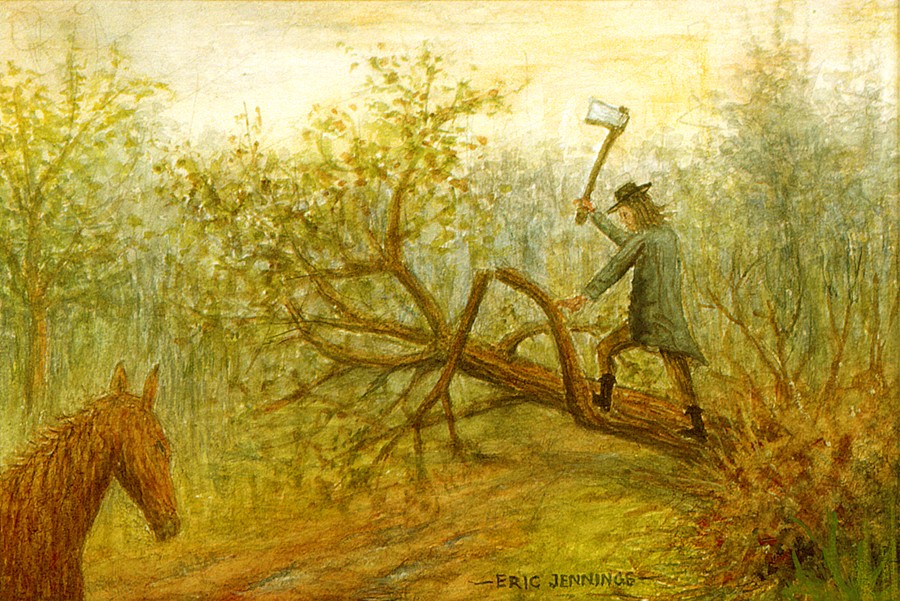 Asbury, now so ill that he must stay in the carriage, wrote: “Brother Bond sprung to the axe, mounted upon the large limbs, hewing and hacking . . . He drives me along with the utmost care and tenderness . . . He watches over me at night . . . If I call he is up and awake in the instant to give me medicine.” 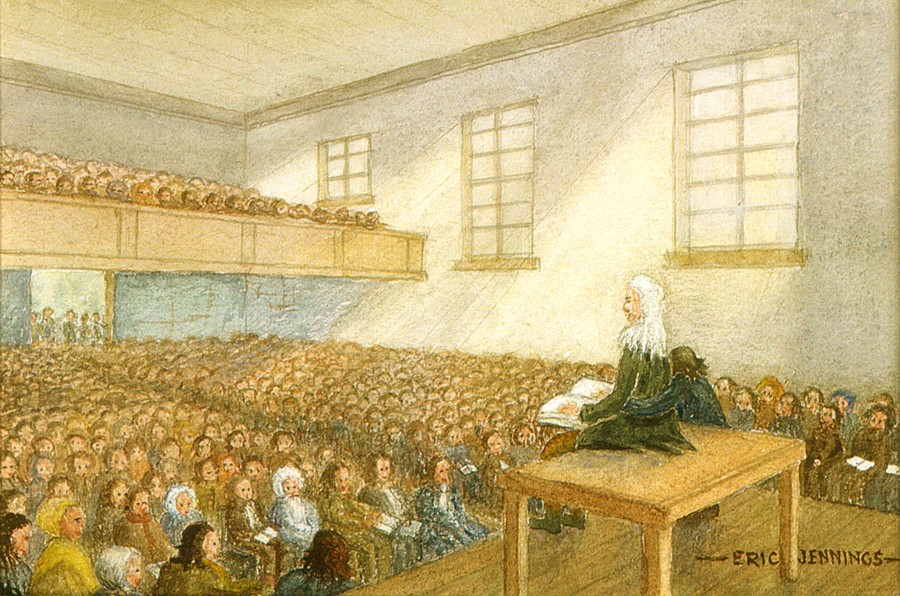 Unable to walk or stand, they carried him into the church and supported him on a table. With frequent pauses to recover breath, Asbury preached for nearly an hour on Romans 9:28, “For He will finish the work ….” At four o’clock on Sunday, 31 March, 1816, Asbury’s earthly journey ended. In John Wesley’s words “he ceased at once to work and live.”

Asbury’s adventurous faith had sowed the seed of a harvest ripening still. He wrote, “In 1771 I longed for 100,000; now I want 200,000 – nay thousands upon thousands.” There are about fifteen million Methodists in America today!